_
Once upon a time... (from the preamble of the Souvenir Cook Book compiled by the Ladies Aid Society of the Presbyterian Church, Milton, Florida, 1906)

In April 1866, Rev. J. N. Lewis, in passing on his way to Pensacola stopped at Bagdad and Milton, preaching once at each place. After leaving for Pensacola, he received a written invitation to return and labor for them. Believing the field to be a promising one for usefulness, and feeling the need of a warmer climate, he promised to come and settle among them.

In December 1866, he moved from Alabama to Bagdad, Florida, and commenced preaching regularly, and at Milton occasionally, as our Methodist and Baptist brethren could spare the use of their houses of worship, which they very kindly did for over a year.

Mr. Lewis taught school in Bagdad, to aid in making support, in addition to his other labors for several months; but as most of the population lived in and around Milton, he felt it very important that we have a house of our own. After much thought, consultation, and prayer, he determined in face of any difficulties to make the effort to build. In order to give himself to this work, he gave up his school and commenced by making an appeal for aid through the papers, and personally by letter. This did not promise to bring in sufficient funds to enable us to go forward. In February 1868, he went to Mobile and New Orleans to ask aid in person. In Mobile he obtained in cash and materials, $535. In New Orleans he received $115, and from other points $27. His expenses were $31.25, leaving $645.75 to be applied to the building. In March 1868, we began to build. (J.W. Bishop was the builder.) 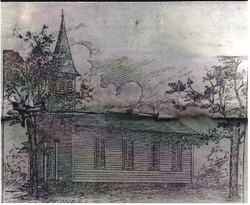 These were the twenty-eight charter members.
_Mr. Alexander Monroe was elected ruling Elder in the new church; he had been previously ordained elsewhere.

Dr. Zephaniah Swift was elected ruling Elder. Mr. W. D. Monroe and James A. Chaffin were elected and ordained as deacons of this church. On Sunday the 16th of August 1868, the dedication sermon was given by the Rev. W. A. Caster of Pensacola. The Rev. J. N. Lewis said to the church, the congregation standing, “You, the Presbyterian Church and congregation of Milton do now in this public and solemn manner, set apart this house from all secular and worldly uses to the above services of Almighty God to be used for His worship only, in all the ways for His appointed ordinances to the Father, Son, and Holy Spirit, you do dedicate this house as a meeting place between God and His dear people forever, praying that His blessing may rest upon it, and upon all who may ever meet here to worship him.”

Also Rev. J. M. Lewis offered the Dedicatory Prayer, returning our hearty thanks to God for his goodness, and asking His acceptance of the labor of our hands, and imploring His presence and blessing upon house and people, saying, “May this house and church long remain a monument to the praise and glory of God, amen.”

The Trustees of the Presbyterian Church were appointed as follows: W. J. Keyser, W. D. Monroe, and Zephaniah Swift.

Mr. Lewis resigned the charge of Milton Presbyterian Church December 2, 1885, but continued to live in Bagdad.


Rev. C. P. Walker supplied the pulpit from July 12, 1885, until March 27, 1887, when he was unanimously elected pastor of the congregation. At this time an application was made to Alabama Presbytery for the church to be withdrawn from said Presbytery and to join that of Florida. Mr. Walker was pastor until February 17, 1895, when he resignation was read at a congregational meeting. The people accepted his resignation. Mr. Walker then had charge of the State Normal at De Funiak Springs, but he continued to serve the church as a supply pastor until September 6, 1895, when Rev. W. S. Porter became pastor of said church, October 29, 1899. Mr. Porter resigned November 13, 1899. Rev. C.T. Walker came to take charge of Milton High School, and he was also employed to supply the pulpit of the Presbyterian Church, until they could obtain a pastor. No stated salary was promised. This provision Mr. Walker accepted, and officiated as pastor until April 1901. Rev. G. W. Tollett was then called; he accepted the charge and began to labor as our pastor in July 1901, and resigned November 10, 1903. Rev. S. G. Hutton next accepted the pastorate December 1903, but was never installed. He served as pastor until November 1, 1904. The next Pastor, Rev. B. R. Anderson, assumed the pastorate of this church the third Sunday of February in 1905. He was installed April 9, 1905, by a committee from the Presbytery, consisting of Rev. R. Z. Baker, Rev. B. L. Baker, and Elder Daniel Campbell who were appointed for that purpose.

But from all of our reminiscences how impressively comes back to us that lesson written upon the works of man. One generation passeth away, and another generation cometh. Our Fathers, were are they? And the prophets, do they live forever? In yonder cemetery they lie, the fathers with the children and the children’s children to the third and fourth generation. All that now live will soon be numbered with the past, those who come after us will gather up the story of our lifetime, and as we have fulfilled our obligations to God and his Church, will write the record of our faith or the record of our folly.